At any given moment The Shining is in my top three favorite movies (and jostling for first place). VHS, DVD, Blu-Ray, 35mm (both whole and also slashed to hell from decades of projectionists slicing frames out of iconic scenes for their collection or enrichment), forwards and backwards, de/reconstructed in Room 237, aped in countless examples of pop culture: I have watched it whenever, wherever, and however possible.

When this great cinematic love meets my love of imbibing, I’m as happy as a guest at an Overlook Hotel party.

First up on my Shining-themed slide into tipsiness was the Room 237 at The Miranda (which I wrote about recently). 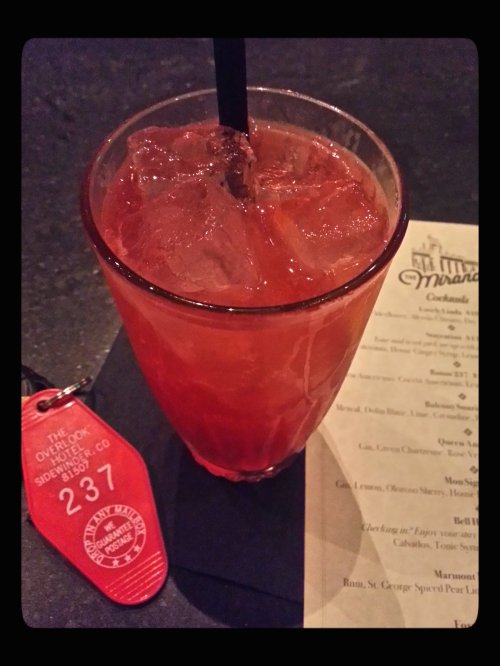 The Miranda isn’t capitalizing on the in-town Kubrick exhibition; rather, their drinks are all hotel-themed. The Room 237 evokes the film’s iconic blood-flooded elevator scene (and general bloody mien) with red-tinged ingredients: Gancia Americano, Cocchi Americano, Agricanto cherry liqueur, sparkling rose, and unthematically colored but zippy lemon juice. Agricanto brings rich, sweet cherry flavors and a silky mouthfeel to the drink but its sweetness is offset beautifully by the layered bitterness of the two Americanos. Sparkling wine lifts it into lighter, more refreshing territory.

Yesterday I was fortunate enough to taste two cocktails from Nopa’s 2015 slate of drinks inspired by The Shining.

Nopa’s themes — called Spirituals — allow for frequent menu changes (yesterday we sipped refreshing summer Spirituals based on the Pimm’s Cup). I could hardly have hoped the Shining drinks would be available a year later, but bartender Stefan remembered the recipes exactly.

My Hedge Maze combined St. George Terroir gin (my favorite gin of all), Green Chartreuse, and Dolin Blanc for an ice cold, pine-scented, pale chiller with just the slightest hint of green to evoke a snowbound hedge maze.

Here’s Nopa’s explanation of the drink, borrowed from their excellent (though now defunct) blog Nopalize:

My fellow imbiber had the Overlook, a play on a Waldorf Manhattan (layers of hotel themes here). Every sip was a microcosm of the movie: it hit the tongue deceptively lightly, a haunted hotel hiding its horrors, then burst into an impossibly long finish of tongue-tingling bitterness, faint smoke, and rich flavor.

Our Overlook differed from the following Nopalize video in one significant way: ours used Fernet Angelico rather than Jelinek Fernet. Its extraordinary finish was crucial to the experience of the drink.

Nopa offered two other Shining-themed drinks: The Gold Room and the Redrum.

When creating a themed drink, relying on color is too easy. The Shining calls for blood reds – cranberry, aperitivo, fruit liqueuers; the whites and blues of cold and snow – egg white, orgeat emulsifications, crushed ice, sabluetage; the orange and red of the iconic hallway carpet; the red and blue of all Wendy’s outfits bar one.

Harder still is evoking an experience. Can non-synesthetes taste a movie? The three drinks I’ve described succeeded: the bitterness lurking under a sweet facade, icy botanical solitude, long haunting finishes. Beyond mere color and clever names, these are as close as I can get to drinking my favorite film.

(Note: The New Mission Drafthouse, which has shown Kubrick’s color films these past months as part of the exhibition, has an excellent associated bar and cocktail program. Yet Bear Vs Bull has not offered Kubrick-themed drinks. For shame, Drafthouse!)