It’s a week of announcements! Hard on the heels of Tales of the Cocktail’s agenda reveal comes the list of 2017 James Beard Award finalists, which includes these notable local cocktail bars and bartenders:

END_OF_DOCUMENT_TOKEN_TO_BE_REPLACED

Also, Gib’s is one of the best cocktail spots in Madison, Wisconsin.

Gib’s is in a house. It’s a very east side thing.

Late at night Gib’s puts out free spicy noodles for its patrons. My party was delighted beyond measure. Not pictured: faces full of noodles.
Madison is the locus of politics and education in the state of Wisconsin, as it houses both the grand state capitol and the state’s flagship university. Boasting spectacular views and pastimes in the lush summer and snowy winter months, this odd isthmus city boasts more cultural creativity than outsiders expect.

This is to lay the groundwork for a bold claim: every time I drink cocktails in Madison, I discover something new before it begins to appear on Bay Area cocktail menus.

You doubt. I sympathize with your confusion but assure you that my years of ongoing investigation confirm the claim.

This time it’s aquafaba or, as it’s more commonly described, the liquid from canned chickpeas that you can whip up into a passable and vegan meringue. In cocktails it can serve as a frothy egg white substitute or simply as a silky note of texture. The first time I spotted it on a menu was at Gib’s Bar.
END_OF_DOCUMENT_TOKEN_TO_BE_REPLACED

The Old Fashioned is a contentious drink. Few others (and I say that with the certainty of someone who has done no research) have such distinct geographic divisions.

Not every article on the history of the Old Fashioned acknowledges this, so I refuse to link to a single one that didn’t do their homework on the northern Midwestern niche of Wisconsin’s brandy Old Fashioneds. Slate, though, did do some pretty great homework on the topic.

As have millions of salt-of-the-earth brandy drinkers:

Having reached the age of my majority in this little pocket of reality where Korbel is king, my interest is piqued by variations on the Old Fashioned. Here are some menus I’ve encountered:

Above: Old Fashioneds on tap at Branchline in Emeryville, CA, 2015.
END_OF_DOCUMENT_TOKEN_TO_BE_REPLACED 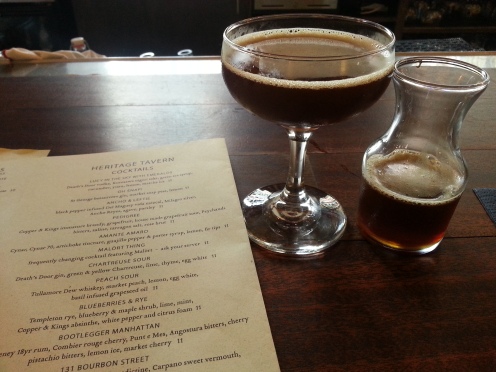 Though I didn’t sip the Amanate Amaro until August 2016, I’d first craved it in January, when someone sent me an image of its description on the menu.

Artichoke enthusiasts will note the layers here. Cynar AND Cynar 70? (Equal parts, I eventually learned.) Artichoke tincture boosts the flavors in the famously artichoke-inspired amaro — especially helpful if, like me, you find Cynar to taste inadequately of artichokes.

Upon learning of this drink I reached out to Heritage Tavern to ask about their housemade artichoke tincture. The detailed response underscored my firm belief that bartenders are the friendliest artists that an enthusiast can speak with. Here are some selections from the information that Bar Manager Clinton told me:
END_OF_DOCUMENT_TOKEN_TO_BE_REPLACED