Also, Gib’s is one of the best cocktail spots in Madison, Wisconsin.

Gib’s is in a house. It’s a very east side thing. 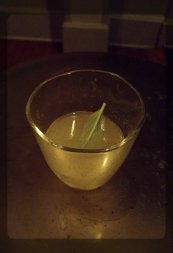 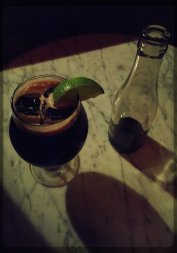 Late at night Gib’s puts out free spicy noodles for its patrons. My party was delighted beyond measure. Not pictured: faces full of noodles.
Madison is the locus of politics and education in the state of Wisconsin, as it houses both the grand state capitol and the state’s flagship university. Boasting spectacular views and pastimes in the lush summer and snowy winter months, this odd isthmus city boasts more cultural creativity than outsiders expect.

This is to lay the groundwork for a bold claim: every time I drink cocktails in Madison, I discover something new before it begins to appear on Bay Area cocktail menus.

You doubt. I sympathize with your confusion but assure you that my years of ongoing investigation confirm the claim.

This time it’s aquafaba or, as it’s more commonly described, the liquid from canned chickpeas that you can whip up into a passable and vegan meringue. In cocktails it can serve as a frothy egg white substitute or simply as a silky note of texture. The first time I spotted it on a menu was at Gib’s Bar.

A month later, the ever-on-trend Camper English helpfully chronicled the Bay Area’s limited aquafaba cocktail options as they stand in February 2017. With only a couple of on-menu options near me, it’s not terribly unusual that I first encountered aquafaba outside of San Francisco.

So cheers to Gib’s, the creative bar who brought me aquafaba, nitro-shattered herbs, and other tempting tipples. Your overworked staff was barely polite but your drinks impressed. Looking forward to improved service and even more menu creativity next time I stop in.